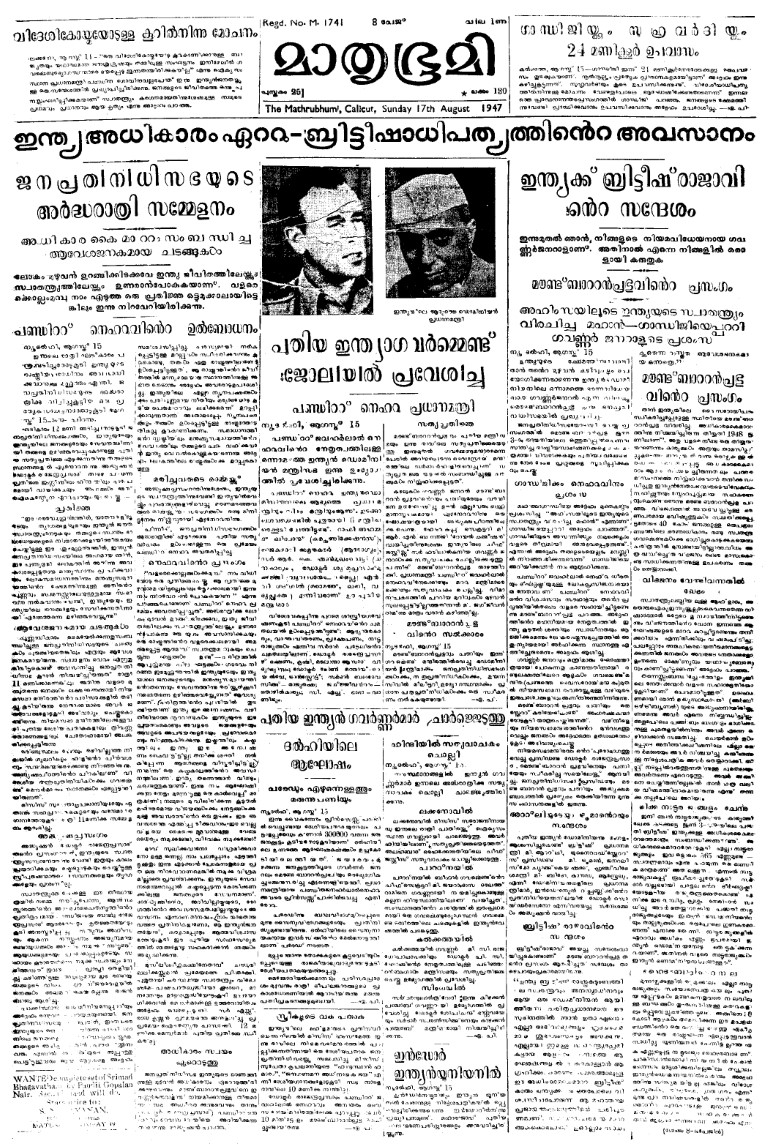 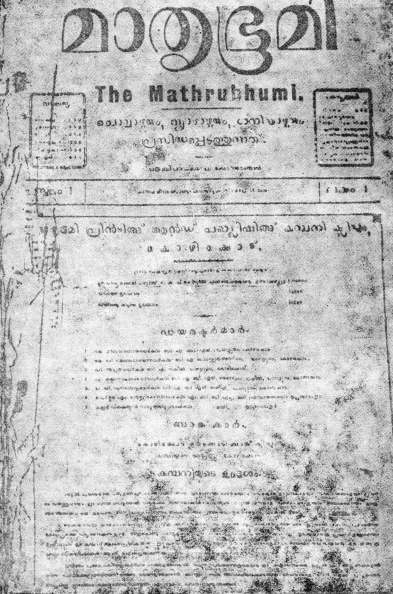 The first copy of the first edition of the Mathrubhumi 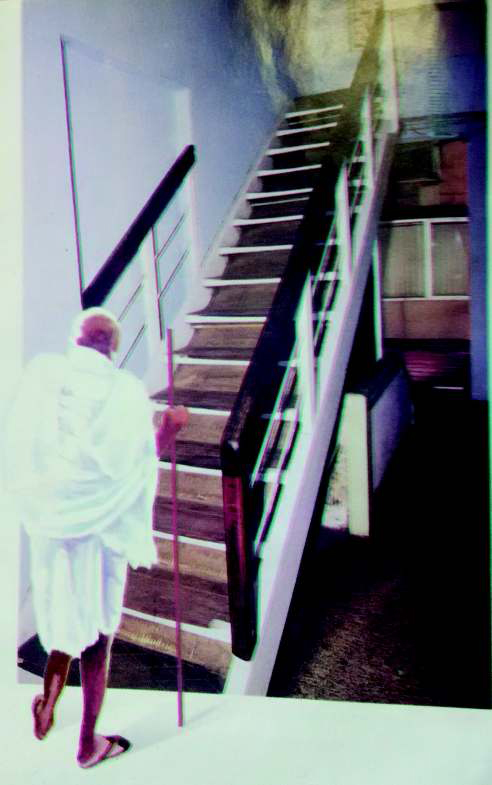 The sacred footsteps that Mahatma Gandhi climbed up and down in Mathrubhumi Office, Kozhikode 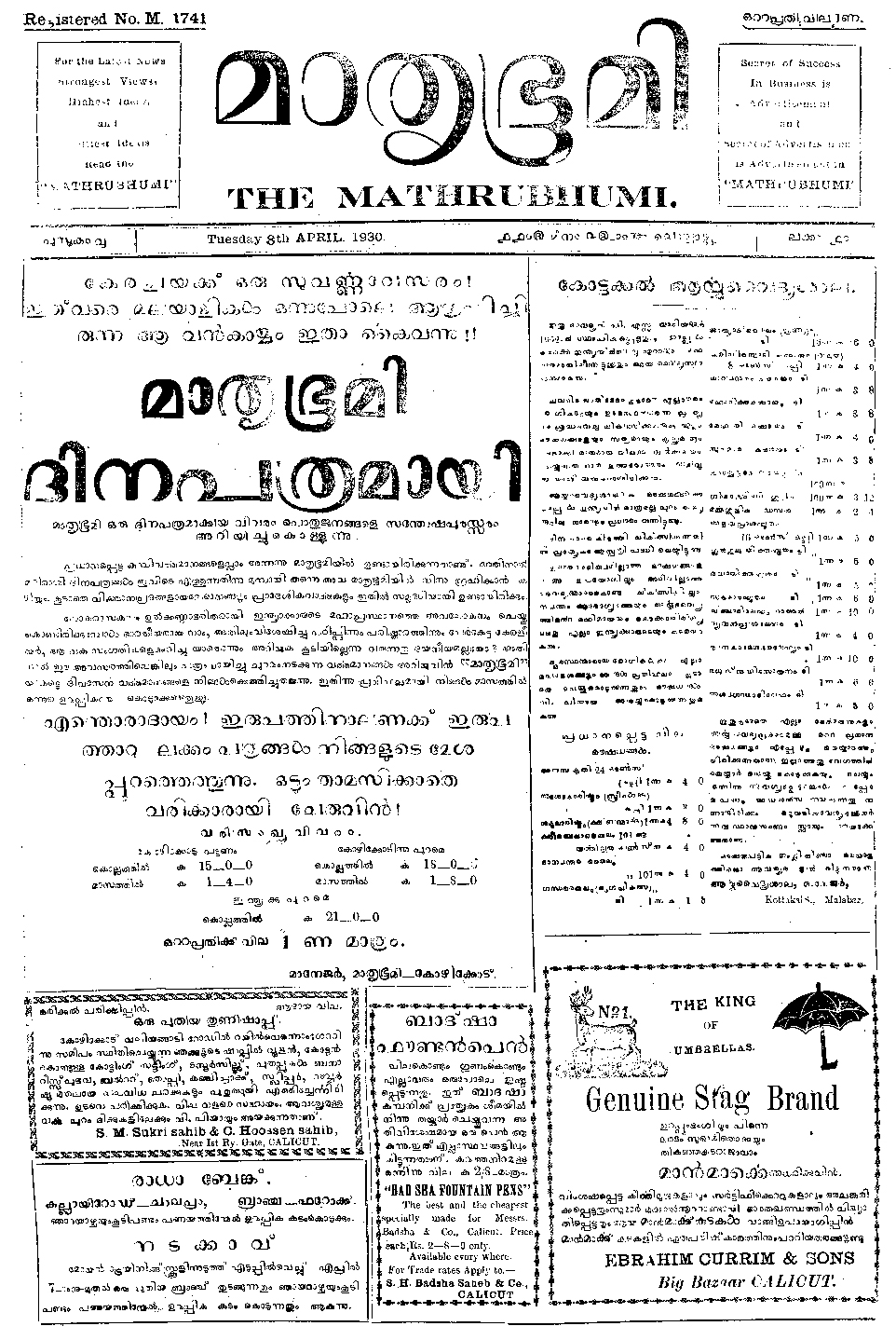 The first copy of the first edition of the Mathrubhoomi

When the Indian struggle for independence began to spread the length and breadth of the country in the 1920s, the present state of Kerala existed as three different regions: Malabar in the north which was ruled by the British directly and two kingdoms – Cochin, and Travancore in the south. Cochin and Travancore were sovereign kingdoms, but they too were under the thumb of the British who kept a control on things through resident representatives who overtly and covertly interfered in the local affairs. Though there were newspapers, both in English and Malayalam, circulating in the area, none of them devoted any space to news about the independence struggle as the managements didn’t want to rub the rulers the wrong way. The storm of protests against the British rule that was gathering strength in different parts of India echoed in the Kerala region also, and Kozhikode became the hub of all such activities in the Malabar-Cochin-Travancore region. As things were heating up, one thing the local leaders found difficult was to circulate news about happenings in Kozhikode and elsewhere and to disseminate messages from national leaders like Mahatma Gandhi. Owners of the printing presses in Kozhikode refused to print even statements by the local leaders as they were scared of inviting the wrath of the British authorities. Some leaders resorted to using cyclostyle machines to get their statements out but that was an inefficient way.

The tense situation in Malabar following the Malabar riots in 1921 also added to their difficulties. A brutal crackdown by the British coupled with communal conspiracies fanned by some groups in the society had led to a tense atmosphere in the region. Around this time some of the Indian National Congress leaders like K.P. Kesava Menon, K. Madhavan Nair, KuroorNeelakantanNaboothiripad, P. Achuthan, K. Kesavan Nair and others started discussing a plan to start a newspaper of their own and brought a printing press with money donated by the public. The leaders were not satisfied by this small press and set their ambitions high. They registered a public limited company named Mathrubhumi printing and publishing co, drew up an ambitious plan to sell 20,000 shares of five rupees each. On February15, 1922, the Mathrubhumi Printing and Publishing Company was registered with six directors – K.P. Kesava Menon, K. Madhavan Nair, T.V. SundaraIyer, AmbalakkattuKarunakara Menon, KuroorNeelakantanNambuthiripad, and P. Achuthan – all of them prominent figures in the freedom struggle.Dr. A.R. Menon was also made a director but he relinquished the post. The efforts of these directors to raise capital ran into difficulties with many rich people ridiculing their plan and some even questioning the need for such a newspaper. Even friends of the directors avoided meeting them. The frosty reception did not dampen the enthusiasm of the people behind the Mathrubhumi project, and their spirit was lifted by support from friends in faraway places. People who shared the spirit of the independence struggle, like V.M. Nair, E.R. Menon, K.A. Subramanyom and R. Krishna Iyer helped sell some of the shares among the enthusiasts living in different parts of India.

The organiser’s aim of raising one lakh rupees remained a distant dream, but with whatever little they collected, the directors entered into a contract to buy a press and its building. After signing the deal to buy Empress Victoria Press and its building, they also bought another cylindrical press from a nearby establishment. Some people offered support by supplying the fuel to run the press and paper to print.

Soon it was time to decide an auspicious date to start the printing. Everyone wanted a significant date that will signal to the world the mission of the new paper. After rounds of discussion between the leaders, it was decided to start Mathrubhumi on March 18, 1923. The date was significant for those involved in the freedom struggle as it marked the first anniversary of the British jailing Mahatma Gandhi over articles published in Young India. The trial and the pronouncements of the judge, captured poignantly in Sir Richard Attenborough’s movie, had been keenly followed throughout India. As the date chosen happened to be a Sunday, a weekly holiday in the region, the management decided to print the first edition of the paper on March 17. It was also decided to bring out the paper thrice every week – on Tuesday, Thursday and Saturday.

On the appointed date, prominent leaders and social activists started arriving at the Mathrubhumi office in the morning itself as Editor Kesava Menon and others scurried around attending to the details. By the evening an array of prominent personalities had assembled in the office to witness the historic moment. As the deadline neared, tense group of well-wishers watched press foreman Chathunni fix the frame into the press and began to rotate the lever by hand for the paper which was to have ten pages. Some were visibly moved while some offered silent prayers as the first copies of the paper came off the press. For some others, it was as euphoric as the birth of their own children. History was made when Chathunni took the first copy and handed it over to the editor, Kesava Menon, whose emotions were as visible as the tears that ran down his cheeks. Rest of the copies that came off the press were quickly grabbed by others amid cries of joy and pride. The event that happened on the Robinson Road building in Kozhikode was more than the birth a newspaper, it was also a signal of the independence struggle taking a firm hold among the Malayalam speaking people in the country From the very first day, the newspaper reflected the desire of the people to get rid of authoritarian rule and replace it with a representative government, and carried the message of a free and fair India that Gandhi and others envisioned.

Not just politics, the paper was also in the forefront in the fight against social injustices like untouchability and entry ban in temples and played an influential role in encouraging social development of the society. The editors of the papers actively took part in the campaign in Vaikom and Guruvayur to allow all Hindus to enter the temples there and some of them were even arrested over this. British and local authorities often targeted the paper over such events and police once raided the Mathrubhumi office to arrest an editor. But the scare tactics seldom achieved the desired effect as the support and affection that local people showered on Mathrubhumi boosted the morale of the workers and gave them strength. The vast encouragement it got from the people in the state finally paved way for the paper becoming a daily on April 6, 1930, the day on which Mahatma Gandhi grabbed the global headlines by breaking the British law by making sea salt in Dandi, to protest against salt imposed on common salt. This was significant as the link between Mahatma Gandhi and Mathrubhumi was deep rooted as the editors followed the Gandhian path as its editorial policy and the Mahatma himself used to write to them giving guidelines on various issues. In fact, he was seen as a “Super Editor” of Mathrubhumi by its founding members. Mahatma Gandhi visited the Kozhikode office in 1934 to unveil a portrait of the paper’s managing director K. Madhavan Nair who passed away the previous year. Almost every national leader who came to Malabar made it a point to visit the office, underlining the importance they gave to the paper. Pandit Jawaharlal Nehru described Mathrubhumi as his personal printer and gave the right to publish all his writings in Malayalam.

The paper’s popularity in all three regions also was crucial in the formation of the unified Kerala state as editors like Kesava Menon played a key role in the campaign to unify Malabar, Cochin and Travancore as one state. In 1932, Mathrubhumi took another significant step by starting a weekly magazine that made its mark in the local social-literary circles quickly. It was the breeding ground for young writers who later went on to win the Jnanpith Award, the highest literary award in the country. Scholar and Writer like M.V. Krishna Warrier and Jnanapith Award winner M.T. Vasudevan Nair, whose works transcended the boundaries of nations and language, had guided the magazine as editors. The magazine also familiarised the literature from different regions to the readers in Kerala. As the paper gets ready to celebrate its 100th year, Mathrubhumi has grown into global media brand which produces local editions not just in major districts of Kerala, but also in other prominent cities outside the state as well as the United Arab Emirates. It has also expanded into electronic medium with its own television channel, FM radio stations, websites in both Malayalam and English with plans for much more. As it marks the centenary, Mathrubhumi has become a modern media powerhouse, but it continues to be a beacon guiding the society as it continues on the path shown by freedom fighters and the Father of the Nation, Mahatma Gandhi.