Kerala - Portuguese and Dutch in Kerala

The first European power to exercise control over Kerala was the Portuguese who found the land rich in spices and trade opportunities. The lack of unity among the local kings also stoked their interest to grab the political control over the region. The Zamorin of Calicut was a major power in the region but he was equipped with foot soldiers, bow-arrow and spears as weapons. He could never be matched with the modern weapons of the Portuguese and their tactics in war. Nicholad D’Canario, the navigator from Genoa, had given prominence to Calicut in his accounts written in 1501-1502. It explains how the King Manuel of Portuguese found the great town of Calicut which was a source of frankincense, pepper, cardamom, ginger, cloves, sandalwood, as well as pearls and priceless gems.* (‘Vasco da Gama and his successors’ by K G Jayne )

Kochi Rajah, the enemy of Zamorin of Calicut, received the Portuguese and promised his support for their business. This helped the European power to set their foot on the land. The angered Zamorin attacked Kochi to take revenge on this. However, the Kochi Rajah managed to win the war with the help of the Portuguese. With this, the king of Kochi pleased very much over Portuguese and gave permission for them to construct a fort in the name of Portuguese king Manuel-Fort Manuel-in Kochi. It was the first fort of a European power in India.

The Zamorin, having gauged the ambitious plans of the Portuguese to control the whole area, found it necessary to resist this growing influence and tried to make use of the ability and prowess of Kunhali Marikkar, the naval chief.

But, the Portuguese managed to shrewdly get the chief to Goa where they hanged him. This unfettered rise of the Portuguese was stalled once and for all with the arrival of the Dutch.

The supremacy of the Portuguese in the region continued till 1663 when the Dutch captured Kochi from them. It compelled the Portuguese to withdraw to Goa where they continued even after the independence of India. Many major events had taken place both in the history of the world and India in the next decades. Notable among these from the point of Indian history was the rise of the Mughals, in the North the decline of the Vijayanagara Empire in the South and emergence of independent kingdoms. The last mentioned had paved the way for the Portuguese power to strike roots in Goa.  The European powers had launched on their imperialistic designs and were engaged in searching to colonise territory in the newly discovered lands.

One hundred and sixty five years of Portuguese rule had left its mark on various aspects of history and on the land and its people. But with each passing year they tended to alienate themselves from the local people. The administrators who came often used aggressive and violent methods to assert their influence, a feature detested by the locals. They destroyed temples, harmed the Muslims, thus intensifying the dislike. The attempts made by the Portuguese to bring the Christians of Kerala under the authority of the Pope annoyed the Syrian Christians. The ‘Kunnan Kurissu” agitation was an outcome of this difference of opinion. The scheming and conspiracy they employed to take the Zamorin’s naval chief, Kunjali Marakkar, to Goa and then hang him to death also had its negative impact.

However, the benefits that accrued to Kerala was something that could not be ignored. The lifestyle of the West, architecture and design, new ammunition and the manner of production were all gains received from the Portuguese. Trained soldiers, cannon and modern guns and gunpowder replaced the traditional bow and arrow among the local rulers. This was a direct benefit of the Portuguese presence. Herbs, spices and coir became popular in Europe. The spread of coconut cultivation was a Portuguese contribution. Cashew, tobacco, guava, custard apple and breadfruit came from the Portuguese. The establishment of seminaries, promotion of Latin-Portuguese language, starting of printing presses, all of this gave a boost to education and growth of modern knowledge in Kerala- something made possible by the Portuguese presence.

With the Dutch taking over Kochi in 1663, the Portuguese lost their grip over Kerala. The English, the French and the Dutch came simultaneously to Kerala. ‘The Dutch in Malabar’ dwells on the period till 1795 when the Dutch withdrew from Kochi, a phase set against developments on other parts of the globe. 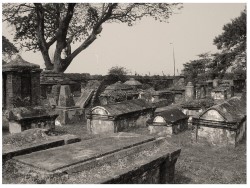