The Dutch landed at the Malabar Coast for spice trade 106 years after the advent of Vasco de Gama.

(A) Size - To the south west corner of India lays the state of Kerala. Its long shoreline is caressed by the Arabian Sea to the West and bounded by the Sahya ranges of the Western Ghats in the East. The 39,000sq.km of territory is bordered by the states of Karnataka, and Tamil Nadu.

Malanad - The Sahya Mountain branches to the East of the state from a part of the Western Ghats. From the Tapti River to the Kanyakumari, the Ghats are a stretch of mountains and its highest peak, the Anamudi, (2,817meters) is in the Sahya section. The physical features of the area are dotted with valleys, plateaus and mountain roads. Wayanad is a plateau. Mountain pass at Palakkad in the western ghats Tamilnadu with Kerala. The next pass is located at Aryankavu. The rail connectivity between Kollam and Shencottah (now defunct), figures in this section. A minor route is the connectivity through Kambham to Kerala. The Aruvaalmozhi pass is the southernmost pass which had great historical significance.

Riverine plains and coastal - This region lies between 30 and 300 meters elevation. Besides this, there is low lying land which is hardly less than 6 meters elevation from the sea and form minor dunes.

(C) Rivers - Forty one west flowing rivers and three east flowing rivers water the state. A large majority of those flowing to the west originate in the Sahya range and flow directly into the sea or via the backwaters into the Arabian Sea. Kabani and Bhavani, the tributaries of River Kaveri, and Pampar flow to the east.

(D) Backwaters - There are 27 estuaries/backwaters that are connected to the sea. Of these, 7 are water bodies that lie to the inner parts and have been used as means of inland water transport. Kerala’s highways and rail take a parallel route along the sea coast from Thiruvananthapuram to Ponnani.


(F) Forest - Forest cover in the state is more than 15560 sq km and out of these 11772 sq kilo meters are dense. Kerala holds the 14th position among Indian states and 28.98 per cent of the land area has forest cover.

(G) Vegetation - Kerala is rich in flora and fauna. Even before Carolus Linnaeus, the father of Modern Botany, a 12 volume informative treatise on the plants of the region, ‘Hortus Malabaricus’, was published in Kerala between 1678 and 1703 with the support of the then Dutch Governor Van Rheede. About 22 per cent of the bio diversity of India is in Kerala. Medicinal plants for Allopathic and Ayurvedic formulations are abundant here. Many of them have been recognised for its medicinal value by modern medicine. The full potential of these are yet to be tapped.

Teak, rosewood, sandalwood, karimaram, margosa, irul and neem figure among those that have drawn world attention. Foreigners have come to Kerala in search of the rich timber. Coconut, arecanut, mango, and jackfruit are commonplace fruit bearing trees in the region. Interesting episodes about these trees find mention in the accounts of travellers, including Marcopolo.

Spices - Pepper, cardamom, ginger, cloves, cinnamon and turmeric are among the major spices produced here. Non-indigenous Plants - Rubber, tea and coffee were adapted to Kerala soil but have over the years acquired prime position in the agriculture and economy of the state. Large plantations dedicated for these crops can be found in the State. Pineapple, guava, and chilli are also plants of foreign origin brought here by the outsiders.

Fruit trees and plants – Jackfruit and mango are commonplace fruit bearing trees seen in the state. Plantains are also grown in plenty and a large varieties are cultivated both as fruit and vegetable. Paddy, millet-corn, pulses, cereals, horse gram, lady’s finger, brinjal, cucumber, snake gourd and so on are the sources of food. Rice is the staple food of Keralites.

Oilseeds - Oil extracted from Coconut and sesame are used as cooking medium. Vegetable oils are used for rituals and also in the manufacturing of Ayurvedic medicines-oil from the Maraveetti seeds Margosa plant for instance.

Animals and Birds -Kerala’s wild life consists of animals from 48 genera, 508 varieties of birds (144 0f these are water birds) 218 fresh water fish varieties, 330 kinds of butterflies, and 80 types of snakes.

Elephant, lion, tiger, monkeys, wild bison/buffalo, and the tahr are animals typical to the Kerala landscape. Elephants have an important place in the cultural, social and religious events. Elephants in the wild prove a major menace to habitations that lie adjacent to their habitats in the forests.

The lion-taled macaque, Nilgiri langur, mountain squirrel and the tahr are found only in Kerala’s forests.

Poisonous snakes like cobra and viper are commonly found in Kerala along with non venomous varieties like rat snake, green whip snake and water snake.

Domestic animals and birds - Cow, buffalo and goat are the major milk producing animals. Keralites also consume meat of these animals besides that of Oxen, bullocks, pigs, rabbit are also used. Hen and duck are domesticated for eggs and meat. Dogs and cats are the domestic pets.

Thattekad Bird Sanctuary (Ernakulam), Mangalavanam Bird Sanctuary(Kochi), Neyyar (Thiruvananthapuram) and the Kurunchimala Sanctuary, the natural habitat of the ‘neelakurinji’ flower which blooms once in 12 years, are the major wild life sanctuaries, national parks and bio-diversity regions of Kerala.
Periyar, which occupies 777 sq km is the first wildlife sanctuary, began in the year 1934. It is also the tenth tiger protection centre in the country. Chinnar (Thrissur) Sanctuary is home to rare mountain squirrel, peacock and also receives migratory birds. 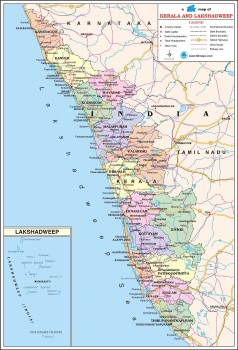 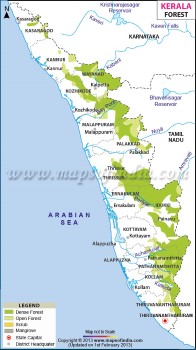