The Portuguese, the Dutch and the English came down to Kerala at a time when it was scattered into numerous princely states, big and small without having any centralised authority or any institutional arrangements to sustain it. The quarrels among the local kings led to relentless wars. Taking advantage of the disunity, the Portuguese tried to control the political power for 165 years and flourished their trade throughout the Malabar Coast. The land of Kerala was fragmented into a number of small kingdoms called ‘swarupams’. Among the ‘swaroopams’, the major ones were the ‘kola swarupam’, the ‘perumpadappu swaroopam’, the ‘truppapur swaroopam’, ‘nediyiruppu swaroopam’ and ‘elayidathu swaroopam’.

Kolathu Nadu (Chirakkal) (Colastry, Kolastry)
When the Portuguese came over to Kerala, the northern most part of it was ruled by the Colastry, a powerful king. It was described in, different names such as Colastry, Kolastry, Kollystry, Kollastry, Kolathiri, in European documents. There was an opinion that Kolathunadu was nothing but the then ancient Mooshakarajyam (Ezhimala) whose king was known as Kolathiri. Kolathunadu was so large that it extended from Korappuzha in the south to Kasaragod in the north. Its other  boundaries were Kudaku Mala, in the east and the Arabian Sea in the west. The Kolathiri had his over lordship over the kings of the princely states of Kottayam, Neeleswarm and Kadathanadu.  The kingdom followed primogeniture, though there was a line of younger princess. The historians are of the opinion that Elirajyam, mentioned by Marco Polo, the Venetian traveller in his travelogue is nothing but Kolathunadu.

The Zamorian Country at Calicut
Calicut remained the emporia of the world trade and commerce. It was ruled by the Zamorins who were a force to reckon with in the central and northern areas of  Kerala. It has been said that the Erady brothers who ruled over the principality Eranadu became later as the Zamorians. The Zamorians established a large empire by the end of 15th century by subjugating the Porlathiri who ruled over the areas in and around the then Kozhikodu (Polanadu) and by illegally seizing the right to conduct Mamamkam from Valluva Konathiri. The ancient document that mentions of the title Zamorin was the one belonging to Iban Battuta who landed at Calicut in 1342. The Europeans treated the term Zamorin as a synonym of 'emperor’ . It is said that the term Samudhri  meaning the king of the sea was metamorphosed itself in to Zamorin. It has also been said that the Zamorian was called as Shylabdhisharan in Sanskrit connoting the king who ruled over the country lying between the seas and hills and that in Malayalam as Kunnalakonathiri

Cochin (Perumbadappu Swaroopam)
The kingdom of Cochin was called as Perumpadappu Swaroopam in the past. It was located almost in the middle of Kerala.Its boundaries are Bharathappuzha in the north, the northern areas of the places Vaikkam  and Chertalai in south, the places Moovattupuzha, Kunnathunadu, Paravoor  and Coimbatore in the east, and the sea in the west. It had five royal branches such as, the Elder  matriarchy, the Younger  matriarchy, the Pallurthy  matriarchy, the Madathunkal (Murungoor) matriarchy and the Chazoor Matriarchy. The eldest among the five became the king.


In the beginning of the advent of the Europeans,Venad lying in the far south of Kerala was branched off in to different principalities. There are difference of opinion among historians as to the evolution of Venadu. It  is said that Quilon was the capital of Venad  initially and that it was branched off in to two of which one, the branch of Thiruvithamkodu (now in the district of Kanyakumari, TamilNadu) constructed a new palace and shifted itself there. This  branch was also called Thrippappur Swaroopam (Travancore). In  the second half of 16th century, this branch raised a new palace at Kalkulam (later known as Padmanabhapuram) which was later shifted to Thiruvananthapuram. The  branch of Venad at Quilon  was known as Desinga Nadu.

The Adoption of Princess and the Country of Attingal
It is said that when Venad became heirless  in 14th century, two princesses from Kolathunadu, a principality in the northernmost of Kerala were adopted at Venad and that the country given away to them is known as Attingal. The Lady at Attingal has been conferred with special powers. It  is the sons of the Queen of Attingal  becomes the king of Venad.

Karunagappally, Karthikapally (Marthia or Carmapoly)
The headquarters of the principality Karunagapally,  consisting of the areas of the present taluks of Karunagapally,  Mavelikkara and Karthikapally, was Maruthurkulangara. In  European documents, it was recorded as Marta and Karnapolly. Karthikapally  was a small  strip of land lying between Kayamkulam  and Purakkadu.Vattamankotta was the headquarters of the local ruler which was mentioned in Dutch documents as  Bettimeni and Karimpalli

Kayamkulam (Calicoipan)
Its first name was Odanad. In the 15th century, the capital of Odanad  was shifted to Kayamkulam(Eruva) and with this it was known as Kayamkulam. It  was a kingdom under whose jurisdiction came parts of Mavelikara, Karunagapally and Karthikapally.

Purakkadu (Chempakasery) (Porca-Purakad)
Purakadu, a.k.a Chempakasery  is recorded as Porca  in European records. It, consisted of the areas of Kuttanadu  and Ambalappuha, was ruled over by the Brahmin  kings, Devanarayanans. These  broad-minded rulers helped a lot to the poets and those thirsty of knowledge. Kunjan   Nambiar, who sang the advent of Kaliyug with the arrival of Lanthakkaru (the Dutch) and Paranki (the Portuguese) and the English, was  a court poet of this native ruler.

Pandalam –Poonjar
Pandalam was a little strip of land comprising of a few villages of Chenganoor. Related  to the families of the  kings of Pandyas, the kings of this kingdom are connected to the hill shrine Shabarimala. Likewise, the small strip of land Poonjar, consisting of Poonjar  of Meenachil and High  range areas ,belongs to a family of the Pandya dynasty.

Edappally
The principality of Edappally in Cochin  and Vaipinkara were established by a Namboothiri  who performed pooja in Thrikkakkara  temple. In the European documents it was mentioned as Rappolin.

Nileswaram
Hosdurg was the principality of Nilesewaram. It  was said that the offspring out of the wedlock between a prince of Kolathunadu and a princess of the Zamorin family  established the house of Nileswaram. The Nileswaram became many times the victims of aggression launched by Badnor  Nayaks or Ikkeri Nayaks who established their supremacy at South Canarese.

Kumbala
This principality which consisted of the major portions of the Kasaragod extended  from the river Chandragiri in the south to Kumbala in the north. The principality followed system of Marumakkathayam inheritance. Men married Nair women and the former were called Thampans.

Ali Raja, Kannur
Ali Raja, Kannur: The family of Ali Raja is the only Muslim royal family in Kerala. This family followed matrilineal system of succession. If the ruler is a male he is called Ali Raja and if it is a female, she is called Arakkal Beevi. They were experts in trades and once they had the control over Lakshadweep. 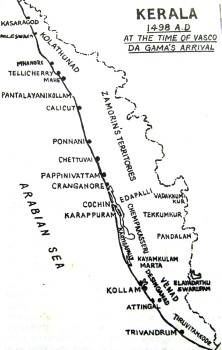 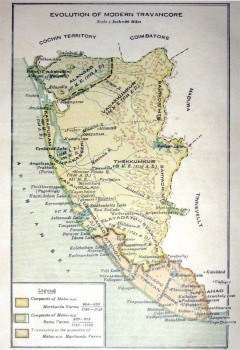 The Evolution of Modern Travancore 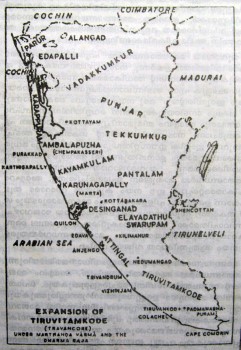