Netherland’s Queen Maxima and King Willem Alexander were accorded a colourful and warm welcome in Kerala.

The royal couple who were on a State Visit to India at the invitation of the President Ramnath Kovind paid a visit in Kerala on 17 October. The Royals were on a short visit in Kerala by the invitation of Mr Pinarayi Vijayan who was in the Netherlands months ago. The then Princely State of Cochin was under the paramountcy of the Netherlands during seventeenth century. The Bolgatty Palace in Cochin was constructed by them. The king and the queen visited the Mattanchery Palace which the Dutch renovated for the then reigning king of the Princely State of Cochin.They participated in the Seminar held in the Palace. The Royal couple watched a documentary on the Dutch rule in the then Cochin. Later Agreements were signed by the two countries for the exchange of archaeological documents. The king Willem later said that the co-operation with India would continue. The Royal couple visited on 19 October Kuttanad, and they together enjoyed the backwater cruising there. The king elicited from the officials the mode of cultivation as practised in Kuttanad. Later the Royal couple went for the Netherland via Cochin.

Netherland’s Queen Maxima and King Willem are being received at the International Airport, Cochin by His Excellency Muhammad Arif Khan Governor of Kerala, Mr Tom Thomas, the Chief Secretary of Kerala and Prof. C. Raveendranath, Minister for Education of the Government of Kerala. 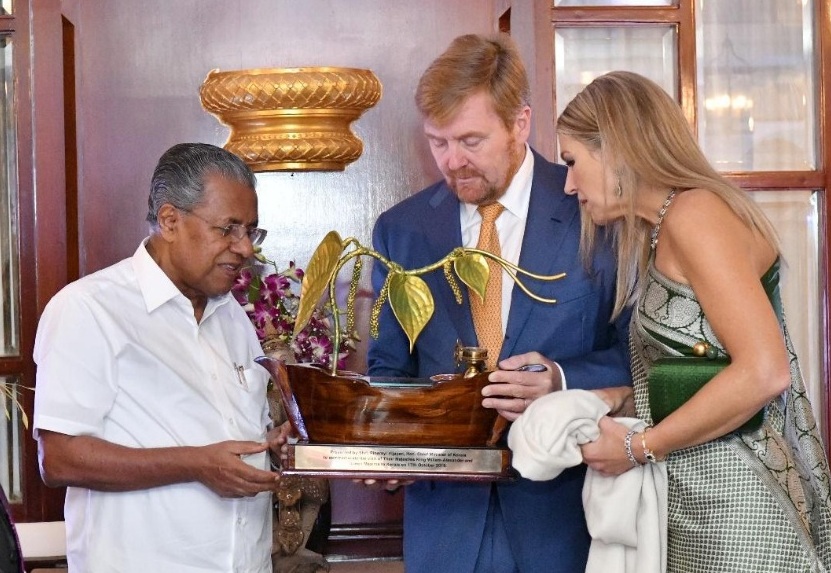 Chief Minister Pinarayi Vijayan presents a memento to King Willem-Alexander of The Netherlands and Queen Maxima in Kochi.